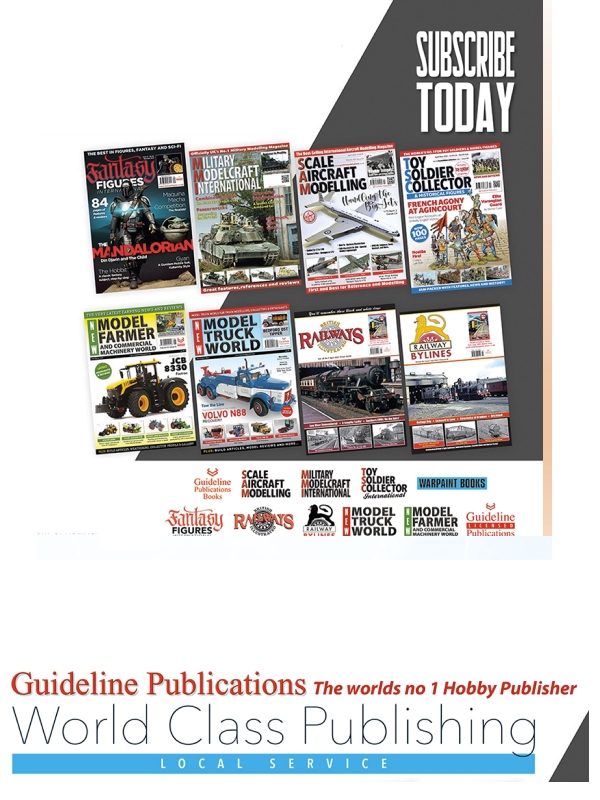 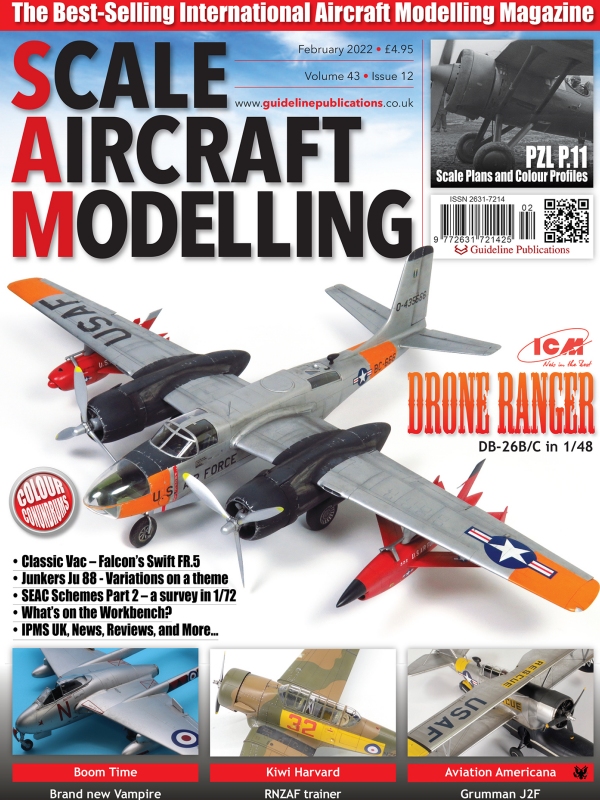 Scale Aircraft Modelling
In the face of a changing marketplace SAM has proved once again that it is the first, the best, and the most obvious choice for aircraft modellers.
With over four decades of publication behind it, and an editorial team committed to providing the broadest possible coverage of the hobby no other magazine has provided such stability and continuity through these challenging times, and we continue to build on this reputation month on month with a balanced content of news, reference material, and modelling to offer the reader not only choice but the inspiration on which to base it..

Our historical and reference pieces are widely respected for the coverage they offer, and collected by readers for their ground-breaking research.
Our monthly centre-section offers a one-stop precis of aircraft types based on the old 'Profile' series, but updated with colour artwork and scale drawings, while Colour Conundrum draws on original Air Ministry documentation to offer new ideas for well-covered subjects, often with unique insights into camouflage and markings.

From first-time builders to competition winners, SAM has something for everyone, showcasing techniques and products, and demonstrating skills and ideas that can turn an everyday model into a show-stopper. Always inclusive, our core modelling content is aimed at all skill levels and disciplines. There is no 'right' way to build a model. We each assimilate skills and ideas to suit our own tastes, and no publication is better attuned to what its readers want and need from a magazine. Make SAM your choice! 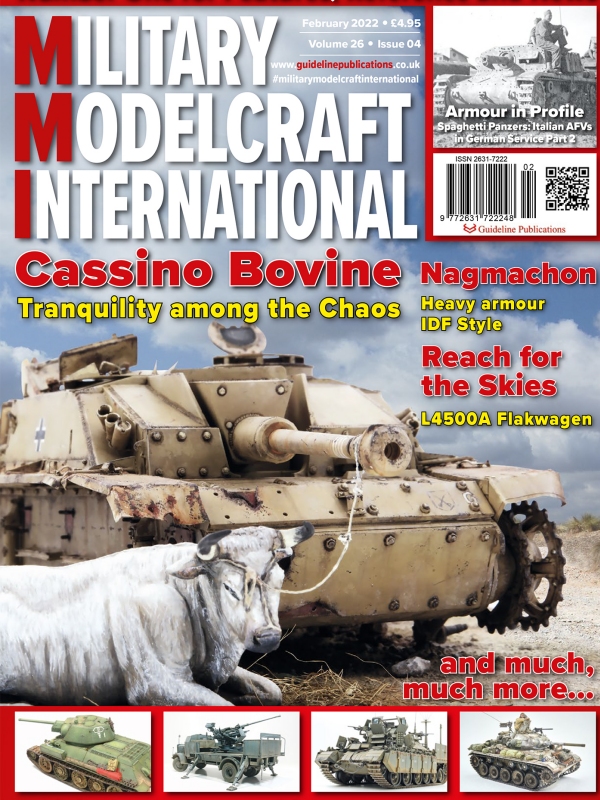 Military Modelcraft International
Military Modelcraft International is the world's leading English-language military modelling magazine. Each month it is packed with step-by-step build articles, exclusive reference material, and the latest news and reviews from across the hobby. In each issue we bring you the very best armour modelling from across the world, with informative and accessible text and high-quality photography helping you to improve your modelling skills and get the most from your hobby.

Military Modelcraft International covers the whole history of armoured warfare from the Western Front in World War I to the battlefields of today. Its feature articles cover the main modelling scales from 1/72 to 1/16 and they range from complex scratch-built projects to builds designed to help newcomers to the hobby. Stand-alone models, vignettes and dioramas all feature in our pages, covering the entire spectrum of the armour modelling hobby. Working with leading model manufacturers and paint companies, our step-by-step features bring alive the benches of some of the best-known names in the hobby providing you with a bank of modelling knowledge that will enrich your hobby experience. 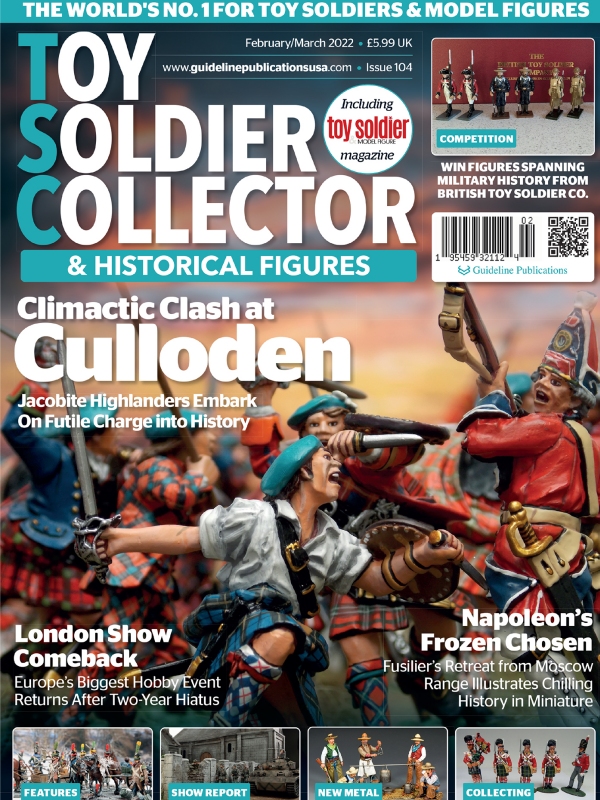 Toy Soldier Collector & Historical Figures
Toy Soldier Collector and Historical Figures is the world's premiere magazine for all types of aficionados. It is the only print magazine that delivers an engaging blend of features about history with a hobby spin, collecting, and how-to projects from creating dioramas to building and painting model figures combined with in-depth hobby news and reviews of the latest products to march out into the marketplace. We recently celebrated our milestone one hundredth edition, plus the magazine has undergone a stylish makeover to become bigger and better than ever with an unparalleled one hundred pages for readers' enjoyment.
TSC&HF works with the world's leading toy soldier manufacturers as well as smaller producers from across the United Kingdom, Europe, North America and farther afield to bring readers exclusive features showcasing the very best that the hobby has to offer. To achieve a lively and interesting mix of hobby coverage with breadth and depth, our team of expert reviewers, historians, collectors and modellers from around the world explore military and civilian topics ranging from ancient history to modern-day armies, navies and air forces. We spotlight the traditional 54mm/60mm metal and plastics toy soldier markets. We also delve into everything from 28mm wargaming figures to model figure kits in all scales.


We strive to provide our readers with captivating text, eye-popping photographs and dynamic design to cement our place as the hobby's number one magazine in the world.
TSC&HF is the publication no enthusiast can afford to be without because we are as serious about collecting as you are! 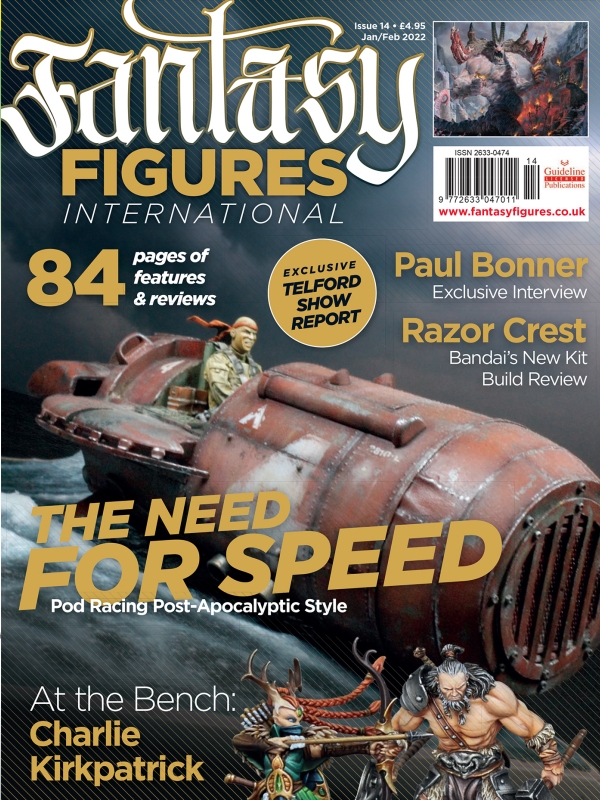 Our Sci-Fi coverage is second to none, featuring Gunpla from some of the best-known names in the hobby, as well as Maschinen Krieger and Stars Wars. Our Fantasy painting articles cover classic subjects and post-Apocalyptic modelling. Fantasy Figures International has something for all levels of modellers, from complete newcomers to the hobby to award-winning painters. 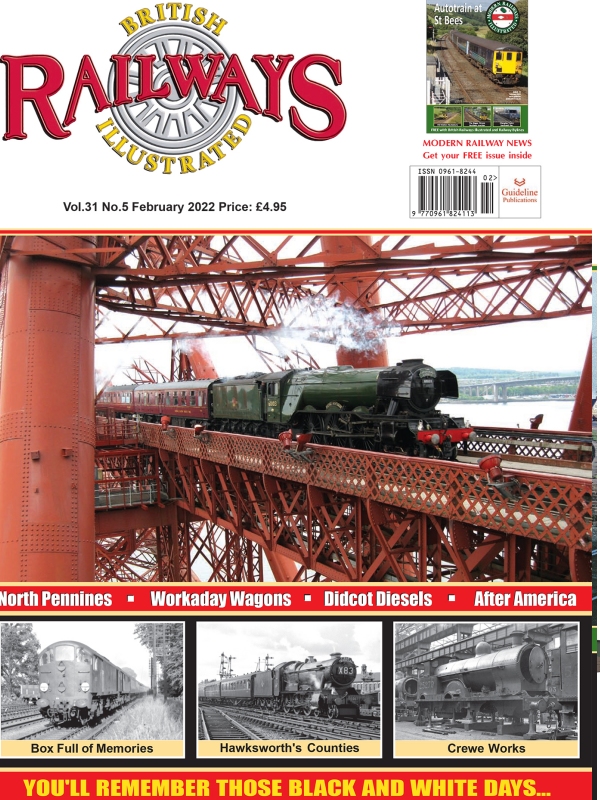 British Railways Illustrated
Now approaching its 30th year and long known by its cheerful acronym 'BRILL', British Railways Illustrated is known and respected for the depth and quality of its historically-based articles. Focussing on the nationalised and early modernisation era of British Railways from 1948 to the 1970s, any aspect of vintage railway operations is grist to the mill as long as it is well-researched and written.
The camera, we are told, never lies, but it can be 'economical with the truth, so BRILL's team of contributors paint a bigger picture, with extended and informed captions bringing to life the classic black and white photography that constitutes the bulk of its content. Featuring a colour cover, 56 pages of text and, typically, 60-70 high quality black and white images, most issues include maps and plans/diagrams where appropriate. 'History with a good helping of nostalgia' is its hallmark with some humour thrown in. .

Modern Railway News is now inserted into the print copies of BRILL. 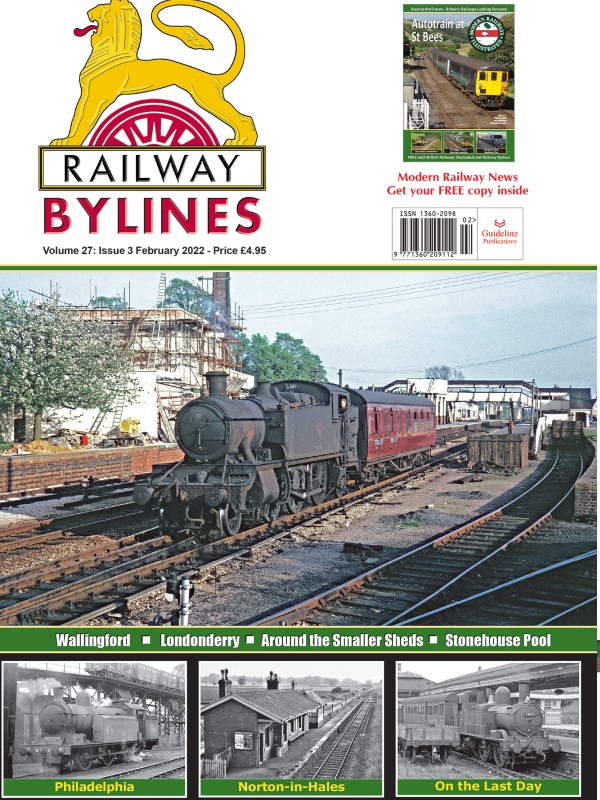 Railway Bylines now in its 26th year.
Companion magazine to British Railways Illustrated, Railway Bylines, now in its 26th year, focuses on the backwaters of our railway system, bringing to life long-gone industrial systems, country branches, narrow gauge and mineral lines.
With a wide-ranging editorial remit the magazine covers the rolling stock, buildings and infrastructure, and its content is largely focussed on pre-1970s subjects, although material is planned and programmed for its interest and rarity and frequently strays outside these parameters.

Featuring a colour cover, 56 pages of text and, typically, 60-70 high quality black and white images, most issues include maps and plans/diagrams where appropriate.
The research skills and erudition of our team of contributors ensures an informed and enjoyable read with a light touch that matches its often out-of-the-way and off-beat subjects. 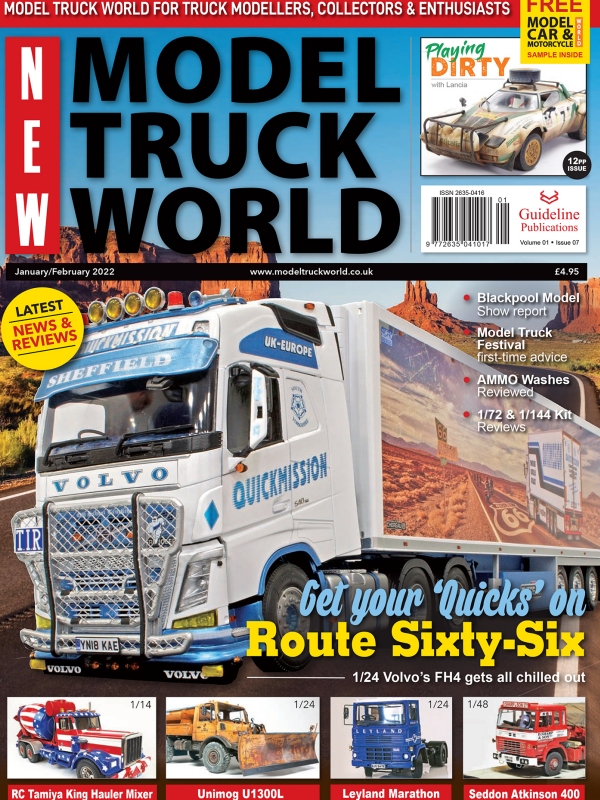 Model Truck World
Model Truck World is the only magazine to combine all aspects of the hobby, bringing plastic kits, die-cast building and collecting and radio control to your doorstep along with the latest news and reviews, show reports, and reference material to enable you to make the best of your hobby.

Model Truck World's key focus is model building whether they are plastic, resin or metal. Inside, the publication is packed full of articles on regular kits, transkits, and scratch-builds, plus practical articles with hints, tips and techniques on building as well as painting and finishing. Each Issue contains colour profiles, plans, technical data, drawings, and reference photographs. We also present model show reports from the UK and, where possible, around the world.

Model Truck World is the home of scale model haulage.

A brand new modelling magazine from Guideline Publications, Model Car & Motorcycle World. Building on our extensive experience of the modelling scene we aim to bring you all you could want in the way of model automobiles 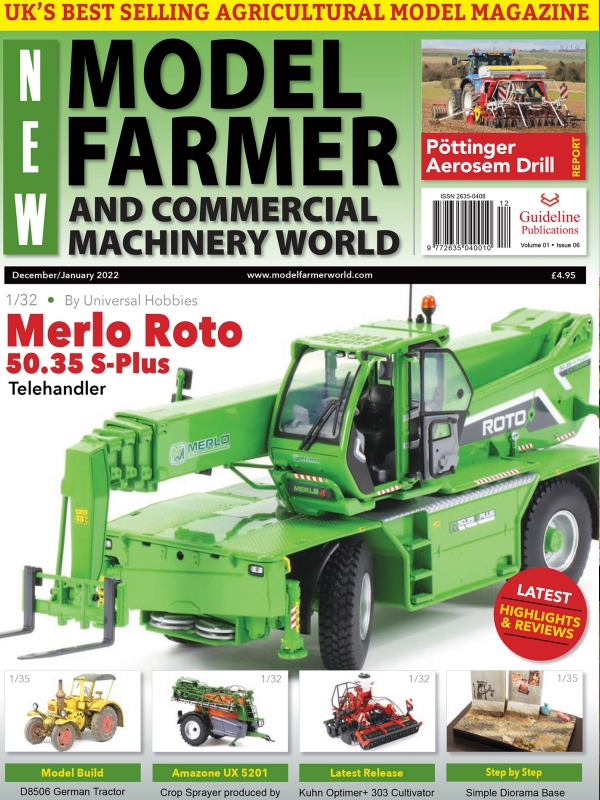 Each issue keeps the reader up to date on releases and announcements from the various model manufacturers and kit producers, both for agricultural and construction related themes and actively welcomes our readers to contribute stories about their collection, or specific projects that they have undertaken. Filled with diecast model reviews, giving the lowdown on the latest replicas to hit the market along with show reports from the UK and Europe covering some of the biggest and most recognised events.

Plastic model kits will be featured in the magazine, with In the Box articles showing the contents of each kit before model building experts take over to highlight their build and painting techniques. Conversions and modifications to existing models will give a taste of the skills of hobbyists to create that one-off exclusive model with How To tutorials covering various weathering approaches. Find out about other collectors and their collecting habits with the Collector Profile stories providing interesting insights into the mind of a collector.
There is a growing range of remote-control models being produced, both from model manufacturers and custom builders so we will endeavour to look into what is currently available along with reports on converting static models into remote control vehicles. 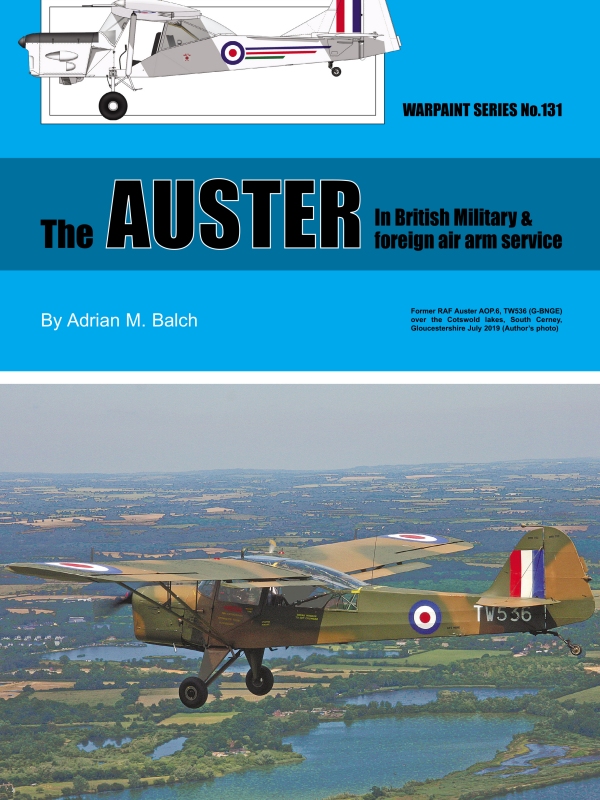 Stemming from the original American Taylorcraft design, the British Auster is arguably as well known and famous as the Tiger Moth, being built at the right time to provide a vital role during WW2 in the Air Observation Post role, spotting and reporting artillery positions, particularly during D-Day and through decades of post-war conflicts worldwide. Founded in 1938 at the Britannia Works, Thurmaston near Leicester, England, as Taylorcraft Aero-planes (England) Limited, they made 1,604 high-wing Taylorcraft Auster monoplanes which were built during World War II for the armed forces of the UK and Canada. The type has proved to be versatile and adaptable to worldwide conditions being fitted with wheels, floats or skis as per the Trans-Antarctic Expeditions, which are all recorded within. This is another comprehensive Warpaint book by Adrian Balch, which covers the design and de-velopment of the Auster, highlighting the variants that were used in military service by the RAF, Army Air Corps and air arms around the world, culminating in the variants built by BEAGLE. Nearly 150 photographs, many rare and never seen before, illustrate the type in military service, supported by 13 pages of colour profile drawings and plans by artist Sam Pearson. 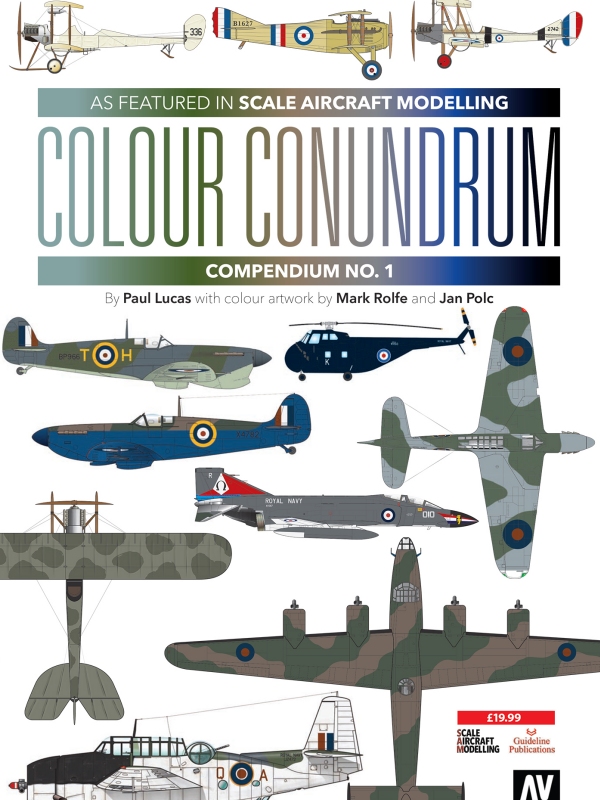 Colour Conundrum by Paul Lucas
80 pages plus 4 cover
What to build next? Inspirational and original reference material has been a cornerstone of SAM since its inception, and 'Colour Conundrum' is designed specifically to offer the modeller something different. With original research based on surviving records in the National Archive at Kew the aim of these articles is to throw fresh light upon some old questions, to challenge some long held views on aircraft camouflage and markings, and to pose new questions that had arisen as a result of the research to which the answers were not yet known.

Quoting extensively from primary sources, the articles also provide valuable insight into the organisation and administration of the air force, and the many thousands of documents and memos that passed from office to office behind the scenes, providing background and understanding that add depth and focus to a model, as well as an opportunity to understand why a specific colour scheme may have been either selected or rejected.

Author Paul Lucas' work is rightly regarded as both valuable and unique in current aviation publishing, and we are proud to be able to present this selection, collected together in book form for the first time due to overwhelming demand from readers. 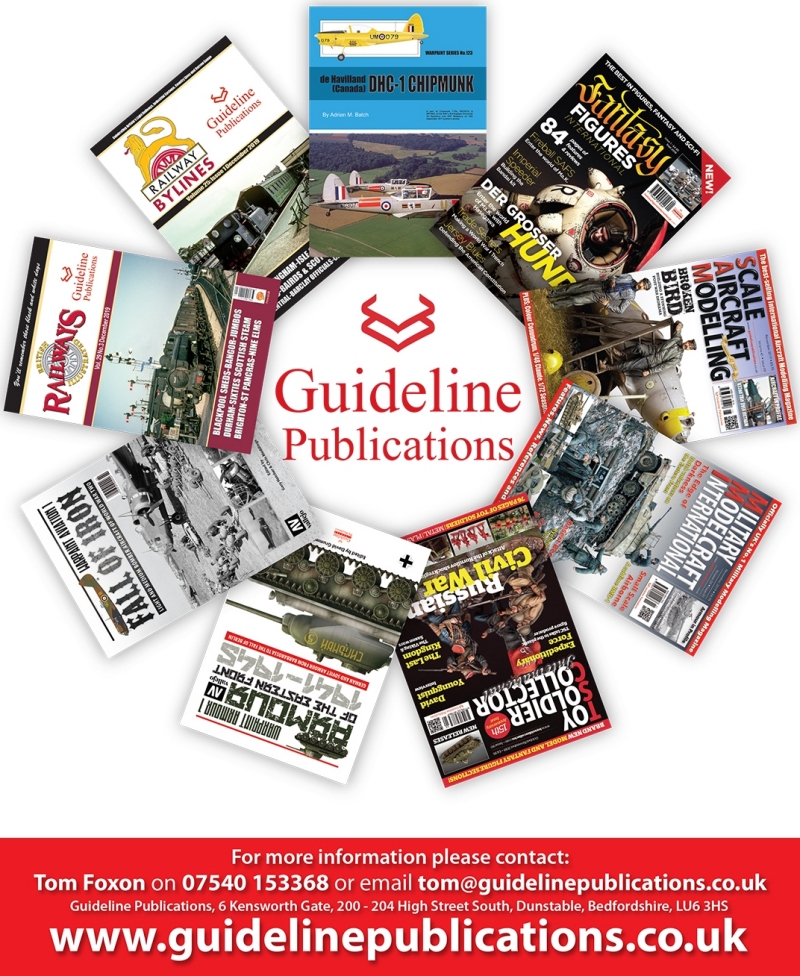